AUSTRALIAN PM’S REMARKS AT ANNUAL LEADERS’ TALKS WITH HIS EXCELLENCY LI KEQIANG, PREMIER OF THE STATE COUNCIL OF THE PEOPLE’S REPUBLIC OF CHINA

These are what the Governments of Australia and the People’s Republic of China have agreed (source from www.pm.gov.au):

Agreed that Australia and China share a commitment to an open world economy.

Committed to advancing global and regional trade and investment liberalisation through the WTO, APEC, and Regional Comprehensive Economic Partnership.

Signed a Declaration of Intent regarding the review of elements of the China-Australia Free Trade Agreement.

Agreed to commence discussions in 2017 to update the Australia-China Tax Treaty, with formal negotiations to commence in 2018.

Signed a Joint Statement on Enhancing Inspection and Quarantine Cooperation.

Signed a Statement of Intent between Australia’s Department of Agriculture and Water Resources and China’s General Administration of Quality Supervision, Inspection and Quarantine on Cooperation on Trade of Salmonid Products sourced from an approved country and processed in China for export to Australia.

Signed a Memorandum of Understanding between Australia’s Department of Agriculture and Water Resources and China’s Food and Drug Administration on Cooperation in the Field of Food Safety.

Signed an Action Plan on Implementing Agricultural Cooperation Projects between Australia’s Department of Agriculture and Water Resources and China’s Ministry of Agriculture.

CONCERNING COOPERATION ON ENERGY AND ENVIRONMENT

Signed an Action Plan on Environmental Cooperation between Australia’s Department of the Environment and Energy and China’s Ministry of Environmental Protection.

CONCERNING COOPERATION ON INNOVATION, SCIENCE AND TECHNOLOGY AND IP

Agreed to establish an Australia-China Dialogue on Innovation.

Agreed that the priorities for the next round of the Australia-China Science and Research Fund would be advanced manufacturing, medical technology and pharmaceuticals, and resources and energy; and committed to funding of up to $6 million from each side.

Signed a Memorandum of Understanding between Australia’s Department of Foreign Affairs and China’s Ministry of Commerce for Strengthening Development Cooperation.

Welcomed opportunities presented by the Australia-China Year of Tourism 2017 and agreed to implement activities throughout 2017 to further enhance bilateral cultural exchanges and people-to-people links.

Reached agreement on the 14th Implementation Program for Cultural Exchanges under the bilateral Agreement on Cultural Cooperation.

Announced a decision by the Australian Government to open an Australian Consulate in Shenyang, Liaoning Province.

CONCERNING COOPERATION WITH THE STATES AND TERRITORIES

The State Government of Victoria and China’s National Development and Reform Commission have agreed to a Memorandum of Understanding on Public-Private Partnerships in Infrastructure Fields.

And Prime Minister Turnbull and Premier Li witnessed the signing of a: 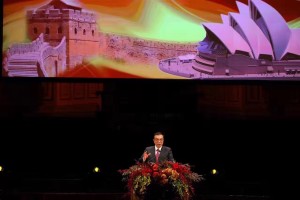 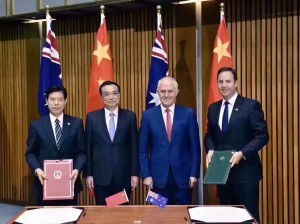