Chinese visitors the largest spenders at $8,405 per capita

On 24 March 2017, Minister Ciobo signed an agreement with China’s Commerce Minister Zhong Shan that will drive greater economic cooperation and greater trade and investment between our two countries.

CHAFTA has already delivered benefits after only one year. The obvious outcomes are:

China’s growing middle class and their increasing demand for the high quality goods and services that Australia offers, will continue to drive the growth of the Australian economy and creation of new jobs.

Australians have been taking  advantage of its position in Asia, as evidenced by the amount of  two way trade  occuring in Asian countries.

According to DFAT, China is the top two way goods and services trading partner for Australia., amounting to more than $150 Billion in 2015-2016. 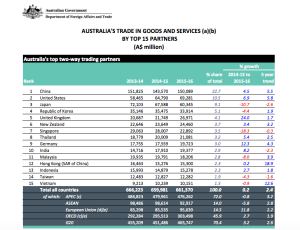 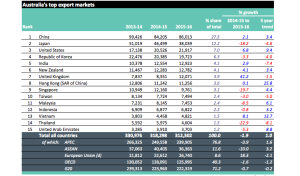 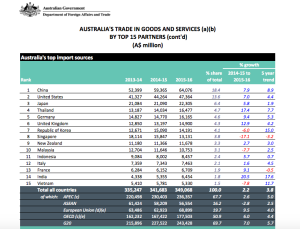