WINE, CHEESE, CITRUS & E-COMMERCE ALL THE RAGE IN CHINA 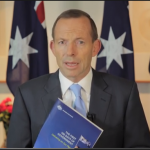 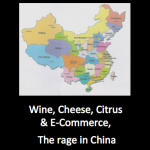 “It’s crucial that the new Australian government gets their policies right to support Australian SMEs in getting a foothold in emerging international commercial and e-commerce markets.”

It’s so important that Tony Abbott fast track the Free Trade Agreement with China to ensure economic and bilateral trade progress in this Asian Century. I’d like to share some fresh insights to help SMEs engage in the Asian Century on opportunities in the wine, cheese, citrus and digital e-commerce markets in China.

A survey by the China Wine Information Network showed that Chinese wine drinkers believe that wine helps to relieve stress – and that they prefer imported wines to domestic wines. Red wines are preferred as Chinese believe that red wine’s color symbolises happiness and good fortune. It’s also more drinkable because it has tannins, which evoke a similar taste to tea.

While Australian wines are in demand in China and export avenues exist, it’s still a tough challenge for smaller boutique wine growers. At a recent Sydney event I spoke with a dozen different wine companies, some already exporting in small quantities, and some desiring to export. Australia produces such high quality wines, but are we competitive enough to expand into international markets?

It’s not just wines that China’s growing middle class desire from Australia. China is showing an interest in Australian cheese milk jelly, known as ‘Nai Lao’. Demand booming and we’re seeing supermarkets stocking up their shelves with cheese, not just for the expatriate market, but for the growing urban middle class. Wine bars and cheese tastings are popping up in first and second tier cities and becoming popular amongst modern Chinese.

Another emerging Chinese market to watch is citrus. China has shown an increasing interest in Australian citrus produce. Citrus Australia has done remarkably well as the peak body representing Australian citrus growers’ interests. The organisation has helped its farmer members increase exports of Australian citrus fruits to a record trade of $5.4 million to China last year. They are focused on improving market access to China and assisting growers, packers and exporters achieve sustainable growth into China.  They were exporting 17,000kg of citrus in 2011, and in 2012 that increased to two million kg’s, so the sky is the limit.

So, opportunities in China (and potentially elsewhere in Asia) exist if your business is wine, cheese, citrus or pretty much anything that now relies on a successful e-commerce strategy.

As Australia strives to move from being a lucky country to a competitive country, it’s crucial that the new Australian government gets their policies right to support Australian SMEs in getting a foothold in emerging international commercial and e-commerce markets. And on that note, here’s hoping we get NBN access for all SMEs all over Australia as soon as possible.

This article appeared in the MyBusiness magazine, official publication of the SME Association of Australia,  October 2013 issue. The magazine is also seen in Qantas and Virgin business lounges.